I happened to be at a conference in Boston in June and it was a great opportunity to go hiking with Kolo afterwards, since he's living in Boston. We decided to go to Oregon and Washington on the west coast. I also met again CouchSurfers Adam, Grady and Jesse, who crashed at my place two years ago.

Adam and Jesse surprised us by picking us up at the airport. Later that day I also met Grady but he wasn't joining us for our trip, since he was off to Alaska. We played frisbee for a while and then prepared for the trip.


The next day we hiked the Eagle Creek trail, which is situated in a steep canyon. The topic of the day was extreme ironing. We had a lot of ideas for this extreme sport, but none of them turned out to be new. Apart from that we had some nice views, there was water everywhere and a huge waterfall at the end. Only Adam had the courage to swim in the creek, the rest of us just washed ourselves. Cool water, cool trip. 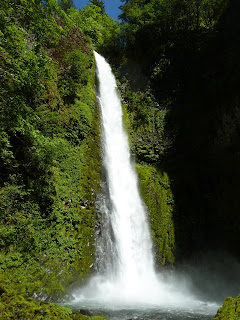 Later, when we tried to get some water at a camping place, we met the owner who didn't like what we were doing. He said that our license place was on file, but I heard "on fire". How could possibly our license plate be on file or on fire? Both didn't make sense, so we let it go. Before we found a spot for our camp, we saw Mt. Adams (12,281 ft; 3,743 m) in its entire beauty. 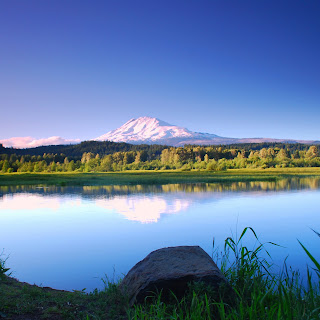 Our main goal was to climb Mt. Adams. The weather this year was crazy. The mountains received a lot of snow in May and June, so the avalanche danger was a bit high. The lady at the ranger station in Trout Lake warned us but we decided to give it a shot. We parked our car at Morrison Creek (4700 ft, 1400 m), since we couldn't continue to Cold Springs due to snow. On our way up we met two snowboarders on their way back from the summit. They said that the route is safe and there is no avalanche danger. Around 7pm we arrived to South Butte and decided to build a camp. The wind started to blow really strong, so we had to build windshields around our tents and also put the tents deep in the snow. We didn't have enough water, because we didn't find the spring at Cold Springs and it took long to melt snow with only one stove. The melted water tasted like sulphur, since we were on a volcano. 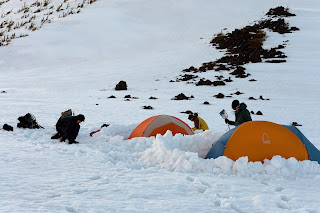 We decided to attack the moutain at 2:30 in the morning, so that we could walk on frozen snow. Even though it was quite cold and I had 1kg of snow to melt inside my sleeping bag, it was still hot inside and I didn't manage to sleep. The weather was almost perfect. Clear sky, -1 degree, but the wind was still very strong. We finally left the base camp at 2:45 with our headlamps on. 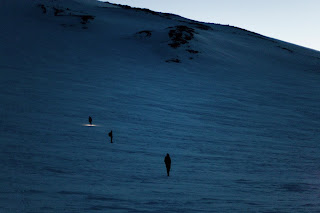 It was pretty tough. We couldn't stop for more than 2 minutes, because the windchill was so strong. I hoped that the situation would improve with sunrise, but it didn't. Jesse took a lot of pictures and his gloves weren't that good, so his hands were cold. At that time the wind was so strong that it almost blew me off from the path. Since I had experience with frostbites, I decided to descend with him and help him in the camp. We all high-fived, since we reached 10000 feet (3000 m) and Kolo with Adam continued climbing. Luckily, Jesse's situation turned out not to be serious. Kolo and Adam managed to get to the false summit (11,500 feet; 3,510 m). We all slept in the base camp for a while, until it became hot inside the tents. We descended back to our car and it started snowing right after I put on suncream and felt really hot. Even though we didn't manage to summit, we had a lot of fun, stunning views and we all learned something new.

The plan for the next few days was to climb Mt. Hood (11,249 feet, 3,428.7 m). Jesse and Adam didn't have time to join us, so Kolo and I rented a car and headed to the Mt. Hood area. Weather was pretty bad. It was raining and when we reached 5000 feet, rain changed to snow. The parking lot at Timberline Lodge was covered with 15 cm of new wet snow. It didn't look good for us. New snow means avalanche danger, so the next day we only did a short hike in the safe part. I didn't feel good at all, so I just hiked to 8000 feet and Kolo continued higher. Again, we didn't manage to summit but at least we took some great pictures. 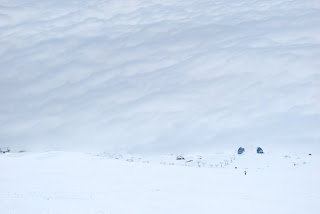 All in all, it was a great week, apart from the donut incident at the aiport. I really like this part of USA and I hope I will return some day. And I would like to thank Jesse and Adam again.