After the World Finals I didn't go back to Sweden, but headed to Taiwan instead. My brother Palo lives there with his girlfriend Angel. We also went to Hong Kong but we will get to that.

It was way below zero when I left Harbin, but 3 hours later I was in Taipei with 25 degrees. My expensive hairstyle was ruined immediately by high humidity. Palo, Angel and her mom picked me up at the airport and we headed out to a restaurant for a proper Chinese New Year's lunch. Angel's two little sisters joined us there. They were 16 and 18, but my guess would be exactly opposite. The older one looked younger. The food was great and after 2 hours of eating I was pretty stuffed. It turned out that I was the only one who still got place for an ice cream. This lunch was definitely one of the highlights of my trip. 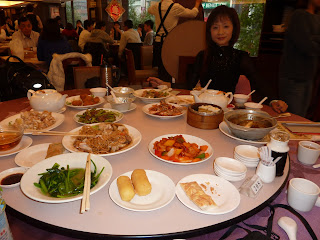 Slovak people living in Taipei have a gathering every 2 months and I came on the right day. It was nice but we left before the end, because we had to wake up early the next day. We took an early train to Hualien, which is in the central part of Taiwan Island. If it weren't for the subtropic weather, I could imagine living there. Comparing to Taipei it was not so crowded and not at all busy. We didn't meet any tourists while we were there. The road less traveled is usually the best and this was not an exception.

We also visited Taroko National Park with Angel's friends. The park has high mountains, some around 3800 metres. We stayed here for 2 days and at this point I started to like the Taiwanese food. Moreover, I think I found the one. After 24 years I found my favourite food. It's called "Cheap, Delicious and A Lot" and they have it everywhere. You pay only 1 euro for a great food. Hmm, I'm getting hungry now, I'll be right back.

After we returned to Taipei, I was tired and didn't eat as much as usual. I blame the weather for this. As soon as the temperature decreased below 20 degrees, everything was back to normal. We also went to Taipei 101, the second tallest building in the world. It was pretty impressive. Do you know that it takes only 10 seconds to fall down from the top? The next day we went to a big night market and I got my hair cut. Every day we ate dinner at a night market, because it really doesn't pay off to cook your own dinner.

It was time to leave Taiwan and fly to Hong Kong. By the way, I flew 6 times during my whole trip and 5 times my check-in baggage weighed 19.6 - 19.8 kilos. The only time it weighed more than allowed was when I used my right hand to weigh my baggage while packing. If you need to weigh 20 kg, just ask me or, even better, my left hand.

After two weeks in Asia, it was finally time to fly back to Sweden. My flight was early, so I didn't sleep much but at least I got an upgrade to business class! I slept well in the plane and the food was great. Somehow I managed to fly exactly on the day of Chinese New Year, so I also got a New Year gift. Thank you, DragonAir!