There are 3 major things I miss in Sweden: my friends, Slovak bread and cold shower. You can get good bread but only in a few food stores. Surprisingly, it's even harder to get a cold shower.

In 2008 I spent a week trekking in Pyrenees in Spain. I had to wash myself in mountain lakes and the water was sometimes 6 °C cold. But somehow I got used to it. When I returned home I couldn't stand normal warm shower and I had to use really cold water. After a while it returned back to normal but I took a cold shower quite regularly since then.

There are three places where I take a shower regularly in Stockholm: my appartment, swimming pool and gym. The showers there have either fixed temperature, or the temperature is not fixed but all you can get is 20-degree water. Which is too much. I remember that the best cold bath was in Soča river in Slovenia with 9-degree crystal water. I would say that this is the optimal value for me.

Fortunately, 4 Slovak friends were visiting south of Sweden in December and I joined them for the first 3 days of their trip. The very first hostel had old-fashioned showers and I was able to take a cold shower for the first time in 2 months. On the third day we were visiting Öland island with good beaches. 4 of us bathed in the Baltic see. Since it was cold (5 °C outside and 8 °C in the water!), we agreed that we are allowed to wear a cap but nothing else. After looking at the photos Marcel suggested that I should be disqualified because I was wearing my watch as well. 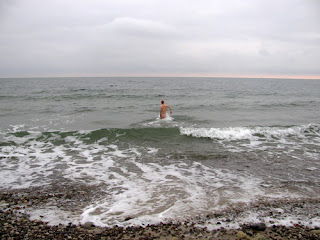 It was good but I have to say that I went out from the water too quickly and I didn't get that much endorphines. I have a suspicion that it was not 8 degrees cold, as I read somewhere on the internet, but a bit more.

If you are interested in taking a cold shower, I have just two advices for you. Do it quickly and use really cold water. Great description can be found in Ode to the Cold Shower Facebook group and also Google is always your friend.
at 18:11
Labels: cold shower, stockholm

The Story of eines Traubenzuckers

Once upon a time there was ein Traubenzucker (grape sugar). Kolo and me went trekking to Spain and we needed some backup energy, therefore Kolo bought this sugar. Since we didn't eat it in Spain, Kolo brought it to our next trip to Lithuania, Latvia, Estonia and Finland. But this time again we had enough energy and didn't need it. This single package of sugar visited a lot of countries, so Kolo decided to give it as a prize in our New Year's Quiz. Although there were many good prizes, my choice was clear from the beginning. I wanted to show other interesting parts of the world to the sugar. During the summer it visited Slovenia and then I took it to Sweden. As its life was about to end (the package said "Best before: October 13, 2009") and I was invited to Bergen, we both agreed that Bergen is one of the best places in the world to die.

Ein Traubenzucker died on Sunday, November 15, 2009 at cca. 20:45 CET. This is the last picture taken before its death. Then we ate it. Rest in peace. 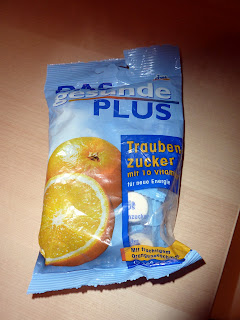 Thanks to Zuzka for inviting both of us to Bergen. It was one of the best short trips I have ever had. You can see the best 4 photos on Flickr or more photos on Google Photos.
at 23:26
Labels: bergen, grape sugar, travelling

NWERC 2009 and One Night in Amsterdam

Last weekend I went to Nuremberg in Germany to represent KTH in a collegiate programming competition. Our team (me, Ulf and Chen) ended up on the third place out of 64 teams and we advanced to the World Finals in China! The event will take place in Harbin from 1st to 6th February and we will also see Harbin International Ice and Snow Sculpture Festival.

Some people considered us to be favorites and at least I am not happy with our performance. All 3 of us had a bad day. The start was fine, but after that we had 3 bad hours. Luckily, we managed to submit 3 correct solutions in the last 40 minutes, which moved us from the 12th place to the 3rd. As usual, I had most of my good ideas on the toilet. In the end I went there quite often. And we also managed to stay calm and focus in the end. 30 minutes before the end I had the courage to delete 30 lines of code and rewrite them from the beginning. It worked!

The organizers really surprised me. We got a prize (2 bottles of red wine) for printing a lot. During the contest the competitors are allowed print their code and some related stuff. We had lots of bugs and our strategy is to debug on paper. I think we printed at least 50 pages and at most 2 at a time. Thanks to us, the people responsible for printing were not bored. On the other hand, printing a lot is considered as bad behavior. I guess we printed the maximum amount which is not yet considered as bad.

After the contest we flew to Stockholm via Amsterdam. Unfortunately, because of fog in Amsterdam, we got stuck at the airport. Hotels were full and our flight was early in the morning, so we decided to stay at the airport. We played dice and then I decided to sleep while others continued playing all night. I woke up when something hit me. It turned out to be a piece of ice. I thought it was Ulf or Fredrik who threw it at me. But few hours later somebody told me that the waitresses at the Starbucks Coffee were throwing ice at people who were sleeping there. Few people suggested that this could also be a sign of attraction, so I guess I will return there in a few weeks and ask them "What did you mean by throwing ice at me?".
at 17:09
Labels: acm icpc, amsterdam, germany
Newer Posts Home
Subscribe to: Posts (Atom)