Travelling by teleport to Tuscany

There exists a mode of transport that is as good as teleport: first you go to the teleport station and then you wake up at your destination. Sometimes you can even take your car with you. It’s called night train (overnight ferries also qualify).

In the last two years I've used night trains a lot, mostly because I find them more convenient and less stressful than flying. And they also emit fewer harmful gases.

Some night trains transport cars, which allows you to make a one-way road trip like this one:

Me and Veronika had a great time in Tuscany, ate very tasty food, rested on the beach and loaded on vitamin D before the winter. Some places were crowded but you can avoid that if you go early in the morning.

I won't bore you with all the details, but feel free to look at the (few) photos below or read my captions in the complete photo album on Google Photos (to see the captions, press “i” on your keyboard). A smaller selection of my photos is also on Flickr.

The first two editions of Music Recommendations were sent to my friends via e-mail, so you won’t find them on this blog.

I sent my last recommendations in 2013, so there’s a lot of music that I’ve discovered since then. Some of it is older than 2013.

I’ve only listed albums that I think are worth listening to, so all my ratings are at least 7/10. You can listen to all albums in one Spotify playlist.

I often hear people say, “There hasn’t been anything new in the music scene since the 80’s/90’s.” To which I typically reply, “Have you listened to Amon Tobin?” This work under Two Fingers is no exception. Make sure you have bass on full blast while listening to this.

Bonus: listen to Two Fingers DJ set from 2013 on Soundcloud or Mixcloud.

When my brother first listened to this, he asked, “What are these guys smoking?” I said I had no idea, but it’s great music. Very crazy and full of contradictory rhythms.

After the end of The White Stripes, this is my go-to rock band. They have great vocals and the style of the songs varies a lot.

Black Sun Empire – From the Shadows 9/10

I thought drum’n’bass was dead but then I found Black Sun Empire. This album is dark, which makes it hard to listen to at times. It usually lifts my mood, though.

The slowest album on the list. Great for evening chill-out.

Mujuice blew my mind years ago at Wilsonic music festival and continues to do so to this day.

The Knife – Shaking the Habitual 8/10

Such a dark and strange album. I keep changing my mind about it. 4 years later I still haven’t been able to fully digest it. Getting used to it takes a lot of time.

Nothing can ever beat Bonobo’s album Days to Come, but he still keeps his standard.

After Swim, which is an album out of this world, Our Love was a disappointment, but still worth listening to. I think I like Caribou more when they play faster than this.

This album makes for a great background music. Worse than the old ones, but they also kind of keep their standard.

I originally thought Clark would be very boring, but this album proved me wrong.

This is dance music that even Richard Štefanec is willing to listen to. Unfortunately, the few very good songs are accompanied by many mediocre ones.
at 08:05
Labels: music, recommendations

Hölloch – Weekend in a Cave

Hölloch is currently the 10th longest cave in the world (it used to be the first). Spending a weekend there was a great experience that I can only recommend. It was also one of the toughest trips I've ever done.

After a short briefing, we left the outer world and entered the underground. My mind wondered about a lot of things:
The first 2 hours to the bivouac were easy hiking with occasional ladders and ropes. The corridors were wide and spacious.

We dropped our stuff at the bivouac and went to explore the cave. The corridors were getting smaller and smaller. Up to the bivouac, we were mostly standing upright, but now we appreciated every moment when we could stand up. We crouched, we crawled and everything started to hurt. I've also crashed many times into pointy rocks in the walls.


We saw some of the best cave formations of Hölloch, but it was nothing compared to what you can see in the Slovak public caves. 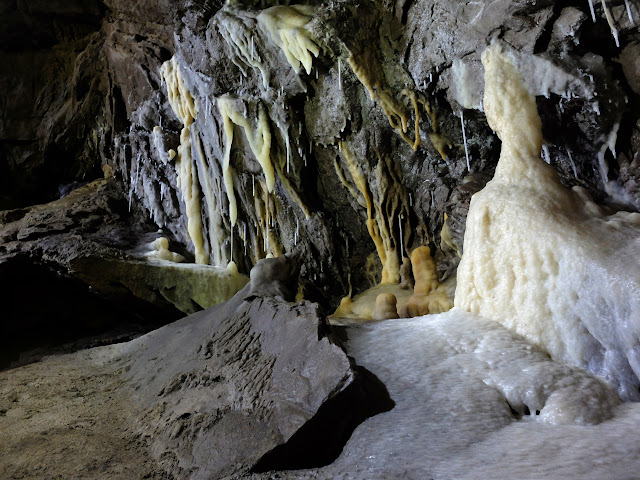 At about 8 PM, our guide asked us if we wanted to continue and I was the only one in the group who said no. Dano later told me that I just said what everyone else was thinking. The guide said that usually only one group per year goes further than us, so we still felt good about our stamina.

In total, we climbed about 1000 altitude meters in 10 hours. When Jakub told me about the trip, I imagined a light cave hiking with an occasional ladder or a rope, but this was some tough shit.

We went to bed but I couldn't fall asleep, because it was too hot. The cave has a stable temperature of 6 degrees Celsius, but it felt too hot in my sleeping bag.

We went for a fairly easy walk in the morning, checking out more cave formations. 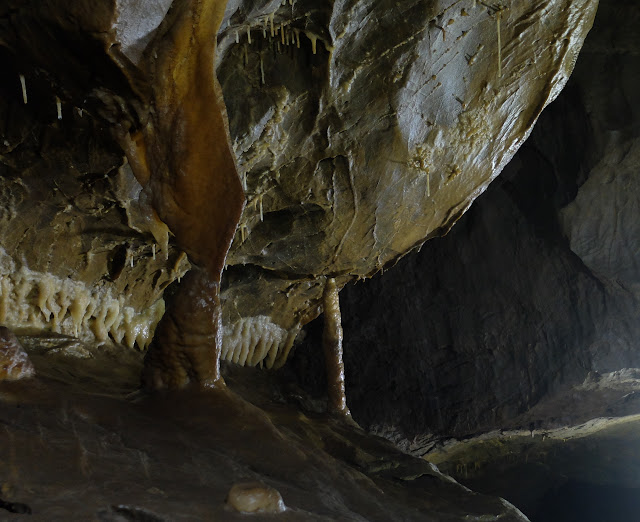 I was impressed with all the infrastructure they have inside the cave. For example, there is a drinking water system that uses just gravity. Or you can send an SMS from the cave using very very long antennas transmitting long waves that pass through hundreds of meters of rock.

It was time for the local Rutschbahn (slide in German), where you slide on one shoe through a steep corridor. The record for it is around one minute, but we went much slower than that. We still hurt ourselves, though.

Before we exited the cave, we also made a small detour and took a boat over a small lake inside the cave. During rain, the water in the lake can rise up quickly and you can't come back the same way.

At this point I was really tired and really looking forward to the exit. Vladimír was not and he needed to crawl through every little passage that fits a person.

At home I discovered that I had a lot of bruises on my body and two bleeding wounds on my back. Every one of my muscles hurt, but it was definitely worth it. Caving is hard but beautiful.