It's been a long time since Kolo and me went to the mountains together. We decided to go to Low Tatras in Slovakia in winter. This time Martin was supposed to join us, but he got ill just few days before the trip.

So here we are. It's January 2, 2010, 8:00 AM and we start our trip from Čertovica (1238 metres). The beginning is pretty steep, but we are rewarded by great weather with good visibility. There is not much snow, roughly 40 cms and walking is easy. Just after we had put our crampons on, light fog appeared. However, it created a stunning scenery and Kolo spent a lot of time lying on the ground while making pictures with his fixed-length lense.

After the lunch at the mountain hut Štefániková chata, we ascent to the highest mountain of Low Tatras, Ďumbier (2043 metres). We are exposed to fog again, but this time pretty seriously with visibility between 10 and 20 metres. A couple of times I saw only snow and white fog around me, which drove me crazy. It felt like I got blind. After two hours of hiking we managed to get to another mountain hut, Kamenná chata. The fog left marks on our personalities. See photo. 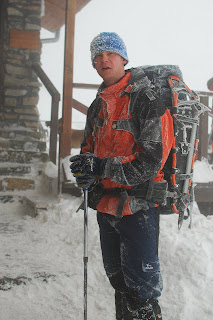 I am not a big fan of panoramatic pictures, but this time I couldn't resist and made one from Chopok (2018 metres), a mountain that is near the hut. Enjoy!

It's three o'clock, just one hour before sunset, so the best option is to sleep in the hut. For the rest of the evening we eat and read. I forgot to take a book and the only thing I had were 2 scientific articles. Still better than nothing, though.

The weather in the morning is exactly the same as the forecast said. -18 degrees and wind speed is 72 kms per hour. And snow and fog. Therefore we decided to descent 500 metres and avoid the highest parts of the ridge. It's hard because we don't see the path and sometimes we have to go in deep snow. 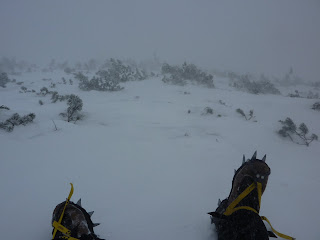 After an hour we finally arrived to Kosodrevina hut. It is a communistic building with a special smell, so we left it as soon as we drank our teas. The next hour was really good, weather improved and we saw the sun for a while. At this moment I thought that we will successfully get to our goal, cottage Ďurková. However, it turned out that the second half of the traversal path has not been used for a while, and thus most of the time we were passing through deep powder snow. Moreover, the wind started to blow again. And it was still damn cold, I would guess -15 degrees. It took us 3 hours to get back to the main ridge, instead of expected 1 hour. In the Poľana saddle we met a group of other tourists. Since it was late, we decided to descent together. At this point I was really exhausted. But luckily I had only to follow other people who knew where to go.

When we got to Jasná, it was already dark and I finally realized what happened to my fingers. It started to hurt. I got blisters on 3 fingers the next day and that means frostbites of second degree. Today is almost a month since the accident and I can use 8 and half fingers for typing -- one hurts just a bit and the other one will need at least another month to recover. The injury was so severe, because the finger was broken a while ago and I cannot move its last part properly. And thus the blood didn't circulate there.

You can now be sure that every time I will go somewhere in winter I will have at least 2 pairs of good gloves. Yesterday I bought a new pair and tested them in -15 degrees in Stockholm. And tomorrow I'm flying to Harbin, China, where there is -27 at the moment.